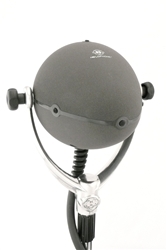 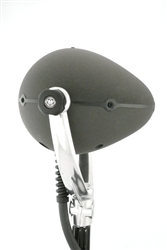 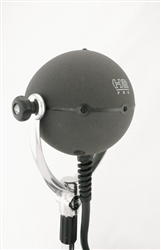 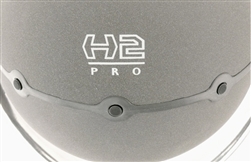 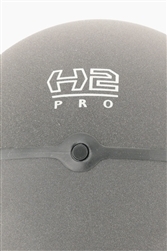 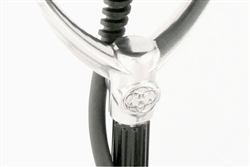 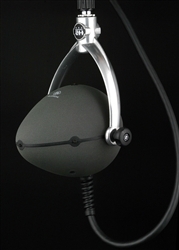 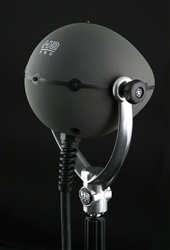 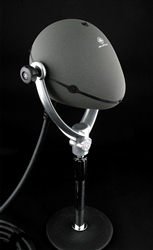 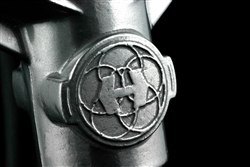 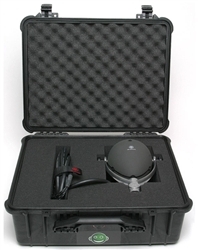 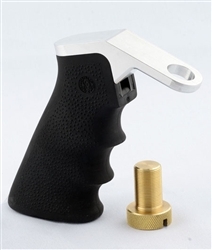 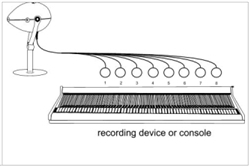 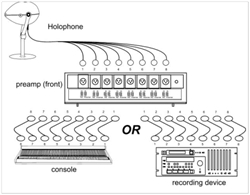 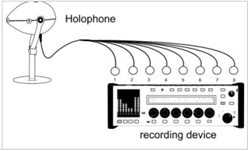 The new Holophone H2-PRO Surround Sound Microphone is the only patented device specifically designed for capturing discrete 5.1, 6.1, and 7.1-channels of surround sound for all professional audio applications.
Its flexibility, ease of use, and performance make the H2-PRO ideal for recording live events and in-studio use. It is well suited for television broadcasters (standard TV, DTV, and HDTV), radio broadcasters, music producers and engineers, film location recording crews, and for independent project studios. All surround sound recordings from the H2-PRO are discrete and in real-time, thereby very easy to bring into any broadcast or studio environment, manipulate, mix and/or encode into any/all of the standard consumer playback formats - Dolby, DTS, and Circle Surround. The H-2 Pro provides engineers and producers total control over all incoming, discrete surround sound audio signals and delivers those signals in an intuitive way.
The Holophone H2-PRO Surround Sound Microphone is entirely compatible with all standard analog and digital I/O devices that accept up to eight channels and provide phantom power including hard disc based recorders, multichannel preamplifiers, standard multichannel I/Os, and all mixing consoles.
The unique and recognizable, elliptical shape of the Holophone H2-PRO emulates the characteristics of a human head. Sound waves "bend around" the H2-PRO as they do around the head providing the most accurate spatiality, audio imaging, and natural directionality of any audio capture device. Capturing the directionality of these soundwaves translates into a very realistic surround sound experience.
The total surface area of the eight individual elements combines with the spherical embodiment of the H2-PRO to capture the rich acoustical textures required for true surround reproduction. The embodiment itself acts as a acoustic lens capturing massive lows and the cleanest of highs. A complete soundfield can be easily and accurately replicated without the use of additional microphones - a simple point-and-shoot operation.
The Holophone H2-PRO is the only microphone capable of recording up to 7.1-channels of discrete surround sound. The H2-PRO terminates in eight XLR microphone cable-ends (Left, Right, Center, Low Frequency, Left Surround, Right Surround, Top, and Center Rear). These co-relate to the standard 5.1-channels and add a top channel for formats such as IMAX and a center rear channel for extended surround formats such as Dolby EX and DTS ES. Recording engineers and producers have total control and flexibility over the incoming, discrete surround sound audio signals and may choose to use as many or as few channels as any surround project requires as channel assignments are discrete all the way from the recording and mixing process to final delivery.
The Holophone H2-PRO Surround Sound Microphone is a breakthrough for all audio professionals recording surround sound. It greatly simplifies the complex issues of microphone placement in any environment, taking the guesswork out of capturing surround sound. Entirely compatible with all surround audio mixing and playback systems, the H2-PRO also enhances mono and stereo mixes. It is the perfect cost effective front-end solution for all professional surround sound audio applications.
A Cure for the Breezes!!
A Windscreen that encapsulates the Holophone H2-PRO head is available for outdoor use. It is very simple to use and light weight. The screen significantly reduces wind noise while also slightly increasing directivity of the microphone elements. It attaches firmly and easily with Velcro tabs for use in high winds......